“Even Michael Jackson’s sister, LaToya said he was guilty” / “James Safechuck’s current allegations back up what LaToya said in 1993”

Posted on August 18, 2019 by jacksonallegations

Michael Jackson detractors often use some of LaToya Jackson‘s 1993-1994 interviews against him. I write “some of” her interviews, because in the 1993-1994 period she was pretty inconsistent.

In the wake of the 1993 Jordan Chandler allegations against Michael, LaToya first gave a public interview about them on September 2, 1993 as a guest on the Today show where she said: “I stand by [Michael] one thousand percent…If you think about it he has been convicted before a trial”. Then, within minutes, she said she did not know if the allegations were true or not and that she was not a judge, and could not make such a determination. [1]

A few weeks later she appeared on the Maury Povich show and she complained that her brother was being convicted by the public when he had not been charged with anything. She stated that there was nothing unusual about Michael’s relationship with children and that she would only believe these allegations if they came from Michael’s own mouth. [1]

LaToya’s turnaround came months later. On December 8, 1993 she held a press conference in Tel Aviv, Israel and this is the press conference that is often cited by Michael’s detractors as “evidence” of his guilt. At the press  conference LaToya said: “Michael is my brother and I love him a great deal. But I cannot and will not be a silent collaborator of his crimes against small innocent children… I love my brother but it’s wrong. I don’t want to see these kids hurt”. [1] 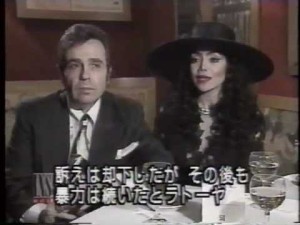 LaToya with her manager-husband, Jack Gordon

She claimed that their mother had shown her checks Michael had written made payable to the parents of children “for large sums”. She also claimed that their mother would refer to Michael as “that damn faggot”. (Katherin Jackson later denied these claims.) LaToya’s husband-manager, Jack Gordon further told the press that Michael had threatened to kill LaToya and tried to kidnap her twice to keep her silent.

In another interview with Maury Povich LaToya said she never saw Michael in bed with any boy, but she believed that her brother was guilty. She stated she saw a check in the amount of $1 million made out to the father of a young boy. She also stated that she didn’t believe Michael was really addicted to drugs and that it was a made-up story. (By now it is a known fact that Michael’s drug addiction problems at the time were real and it was not a made-up story.)

In particular, the story about the checks is used as “evidence” against Michael by detractors until this day. The suggestion is that it was some sort of hush money for sexual abuse.

The reality is, though, that even if the story of LaToya seeing checks was true, the jumping to the conclusion that it was hush money for sexual abuse, would be quite a quantum leap into conjecture. There can be a whole lot of reasons why someone might write a check for someone else. In actuality, when LaToya was asked a direct question in an interview about whether it was hush money, she admitted she could not tell that.

You might have noticed in the above linked interview that LaToya said she saw these supposed checks in 1984. In an interview with Gerlando Rivera on February 21, 1994 she further specified the story and said that the checks she saw were written to a boy whose father was a “garbage collector”.

From this information Michael Jackson’s detractors (among them journalist Diane Dimond) concluded that the boy in question was James Safechuck, since it is his father who had a waste collection company.  Jackson detractors then use the current Safechuck allegations as evidence of LaToya’s 1993 claims being true (or LaToya’s claims as support for Safechuck’s allegations).

In reality, nothing in this story adds up. James Safechuck’s current allegations do not confirm LaToya’s “hush money” suggestion at all, nor do LaToya’s 1993 claims confirm the Safechuck allegations. On the contrary! Even now, the Safechucks do not claim that at any time they received hush money from Jackson. James Safechuck’s allegation is that he never told his parents about his alleged abuse until he was an adult, so of course his parents could not have received “hush money” to be silenced in the 1980s.

Moreover, the Safechucks have not befriended Michael until 1987 and LaToya claimed in her interview above that she saw the checks in 1984.

“We wanted to buy another house, and Michael gave us a loan at a very low percentage rate. My husband had already had a deposition. We were on Michael’s camp. My son also for Michael. And after that was all said and done is when Michael forgave the debt. Michael said, “No, I don’t want you to pay me anymore,” um, “It’s a gift.” So, he did buy us a house. It’s just coincidental, he wasn’t buying us off, but the timing’s right there. Just sounds bad. Yeah.”  [2]

According to the loan documents recovered since, the loan was given to the Safechucks by Michael Jackson on May 11, 1992 and it was in the sum of $305,000 (not $1  million, like the sum in LaToya’s story). It is a proper loan, that the Safechucks should have returned. (The John Branca, named as the Trustee of the NL Trust named in the document was a lawyer representing Michael Jackson, and is currently one of the executors of his Estate.) 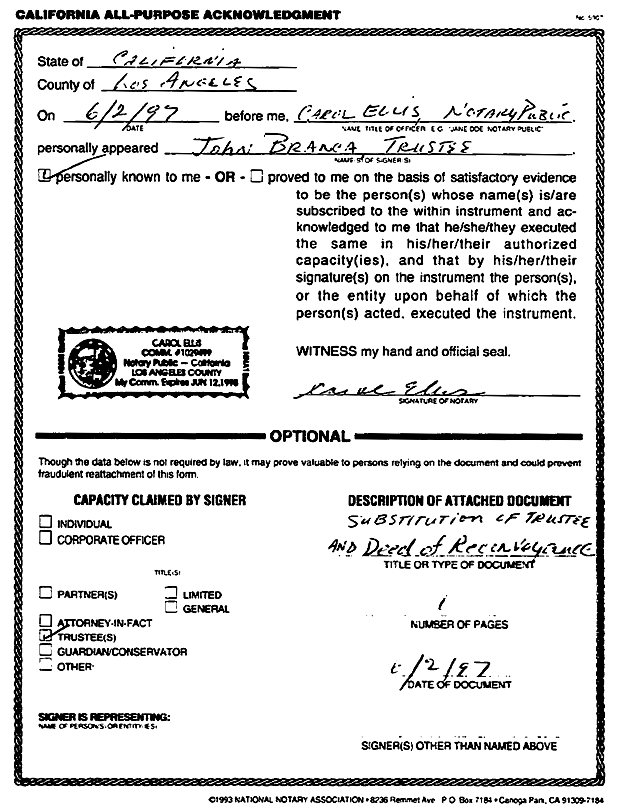 None of this correlates with LaToya’s story and what Michael Jackson detractors are trying to make out of it. The loan was in the sum of $305,000, not $1 million and it was given much later than the time LaToya could have seen such checks. LaToya left her family’s home in Encino/Hayvenhurst in May 1988. She was then completely estranged and isolated from her family by her abusive husband-manager, Jack Gordon. [3] [4] She could not have seen and discussed checks in the family home after May 1988. But James Safechuck’s alleged abuse did not even start until June 1988, according to his own story, so obviously no check before that could have been hush money for his alleged abuse.

In Leaving Neverland Stephaine Safechuck acknowledges that the loan was not any type of hush money (“it’s just coincidental, he wasn’t buying us off”), but she still tries hard to make it sound somewhat sinister (“but the timing’s right there. Just sounds bad”). The timing for Jackson forgiving the loan, that is. The subtle suggestion seems to be that Jackson forgave the loan immediately after they testified for him as a kind of reward for that. That does not make much sense, since if he tried to bribe them he would have told them in advance of their testimony that he would forgive them the loan if they testified in his favor, and no such thing happened, even according to the Safechucks’ own story.

The name of James Safechuck was well known for the public at the time. Magazines and newspapers often mentioned his name in reports about Jackson, so if anyone wanted to make up a “hush money” story about Michael Jackson and a boy in 1993, it would have been a no-brainer to use a boy in that story who had often been publicly seen with the entertainer.

Why would LaToya lie about her brother?

Now that we cleared up that LaToya’s claims in 1993/1994 are not backed up by Safechuck’s current allegations (on quite the contrary), let’s talk about the circumstances under which LaToya gave these interviews in 1993/1994.

Like mentioned above, in early 1988 she left her family on the side of an abusive manager-husband, Jack Gordon. LaToya many years later revealed that Gordon was physically abusive with her and forced her to do many things against her will – like cutting ties with her family, posing nude in Playboy in 1988 etc. According to LaToya’s 2012 autobiography entitled Staring Over, Gordon regularly beat her and intimidated her by threatening to kill her or her brother, Michael or sister, Janet. Gordon completely isolated her from her family and the world, she was not even allowed to read anything or watch television. She was completely under the abusive man’s control. [4]

Gordon hated Michael and rejoiced when the 1993 allegations broke. According to LaToya, Gordon forced her to make that statement at that press conference in Israel and she had to be as convincing as she could be or else Gordon would hurt her. Gordon also threatened that he or his mob associates would kill Michael, if LaToya did not do what he instructed her to do. “I later learned that Gordon had attempted to extort money and favors from Michael’s handlers by telling them that if they didn’t comply with his demands, he would have me make this very statement”, she wrote in her book. [4]

Gordon then made her appear on a few other shows to speak negatively about Michael. Among them was this interview in which LaToya is caught having an earpiece, through which she was told directly by Gordon what to say.

LaToya wrote in her book that she had guilt and regret about what she had done to Michael: “The repercussions of my press conference went around the world. This was at the height of Michael’s fame. He was a superstar of the highest magnitude, but he was also gravely misunderstood by much of the world after decades of false stories that made him seem eccentric and unstable. News of the allegations against him had already created a media frenzy. Now, the fact that his own sister had spoken out was a huge news story. This negative press was just what those working against Michael wanted. Since Gordon was jealous because he said I thought Michael was the closest thing to God, and he hated the way he felt that I worshipped Michael – even though it wasn’t worship, it was love – Gordon was happy to see Michael’s name tarnished, as others were, too. Everyone in the situation won, except for Michael and me. The disdain Michael’s fans felt for me following the press conference could never equal that which I have for myself. If I could go back in time, I would prefer to have died at Gordon’s hand than to have given it to him.” [4]

When Leaving Neverland aired in March 2019, some of the media again tried to resurrect LaToya’s 1993 words against Michael. In reaction to that she tweeted:

LaToya finally escaped from her abusive husband in 1996 – literally escaped as she explains in this video:

Since then she is an unwavering supporter of Michael and she often accompanied him to court during his 2005 trial.

Considering these facts, it is time for the media and detractors to stop taking LaToya’s 1993-1994 words out of the context of the whole situation surrounding her at the time, and it is time to stop ignoring what she said about it after she escaped the abusive situation she was in at the time of those interviews.

[3] Cutler Durkee and Todd Gold – With Her Svengali’s Approval, Latoya Becomes the Latest Jackson to Fire Dad and Leave Home (May 9, 1988)
https://people.com/archive/with-her-svengalis-approval-latoya-becomes-the-latest-jackson-to-fire-dad-and-leave-home-vol-29-no-18/